Built a quadcopter (I)

INTRODUCTION – What is Arducopter?

ArduCopter is a platform for multirotors and helicopters, it’s easy to configure and to fly. It goes far beyond the basic multirotors radio found in the market today. The project is based on the ArduPilot Mega autopilot, created by DIY Drones community.

Unlike of the RF multirotors of the market, ArduCopter is a complete solution to unmanned aerial vehicle. It offers as much remote control as autonomous flight, adding interest points (waypoints), path planning and telemetry from ground control station.

The main features of ArduCopter are:

You can have the complete kit with everything you need. Also need a LiPo battery, a remote radio control and a welder. 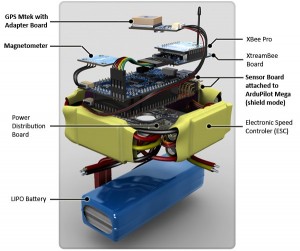 Assembling the APM and IMU

First, solder the pins angled 3×16 in APM plate ( ArduPilot Mega ) to the connectors on the radio control. 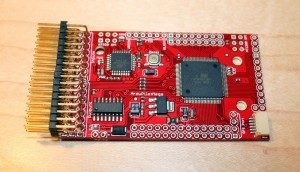 Then cut the pins necessary to adjust the IMU to the APM. 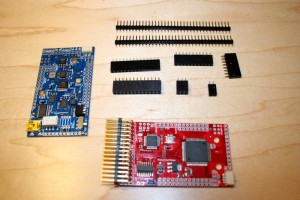 Pin male strips are assembled in each row pin female and necessary trimmed: 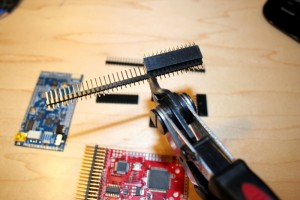 We pairs of pins as the figure below. 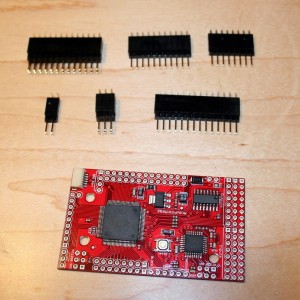 Now solder the male to the plate ArduPilot Mega as shown in the following figures. 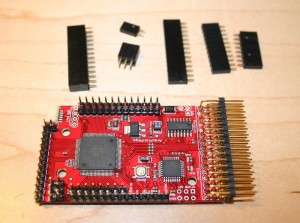 The procedure is repeated with the IMU, pins female soldiers all pins are soldered carefully both plates are assembled. 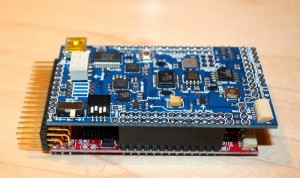 The module MediaTek MT3329 GPS 10Hz is connected to the APM board as shown below. 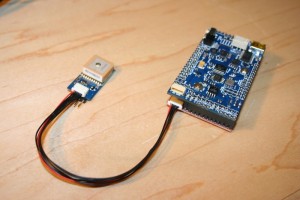 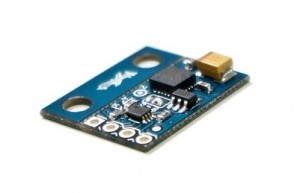 Flying a multirotor when is fixed at a certain height, the GPS, which can only calculate the position when moving forward, is insufficient to correct the drift in the spin orientation ( yaw ). For these cases, you need to add a magnetometer, which is able to correct the deviation, even when the vehicle is not moving. We work with the magnetometer HMC5843 Triple Axis .

In addition, when using the GPS, magnetometer is required to know which direction to move the multirotor to correct for changes in length or latitude. 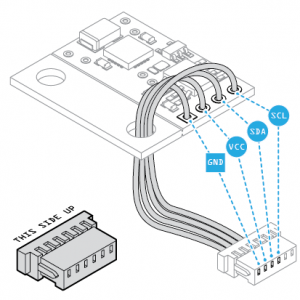 It is recommended to thread the wires through the hole before welding. 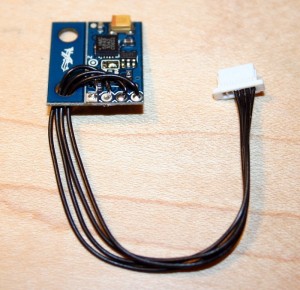 I2C is connected to the IMU 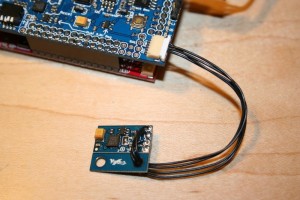 Make sure that the solder bridge magnetometer is 5 V before connecting. 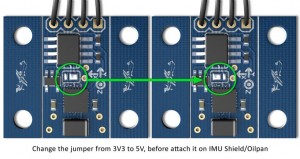 Assembling the structure of cuadcópter 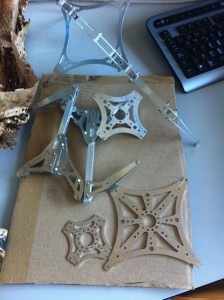 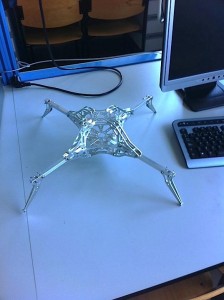 Sunstroke and connection of the power distribution board (PCB)

We need to produce our own energy distribution board. To do this we will have a virgin double-sided board and get sunstroke in laboratories. 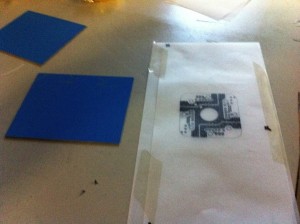 We printed circuits onionskin and after etch the board, we cut and make the necessary holes. 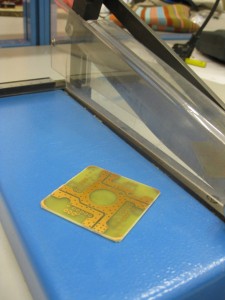 Here we welding the four pins required to connect the ESC and the solder connections which are required for correct operation thereof, as shown in the following figures. 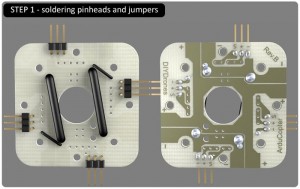 Engines are screwed in the respective holes of the structure. 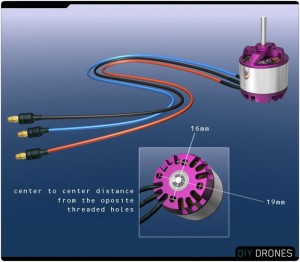 You can get setup in «+», which means the cuadcópter moves aligned with one arm forward, or get a configuration «x» where the APM is pointing between the two front arms.

Two types of propellers is needed, a extractor and a push . The propellers pusher go clockwise and extractor go anti-clockwise. If there is confusion with the names or positions of the helices, ensure that air flows down when the engines are started. 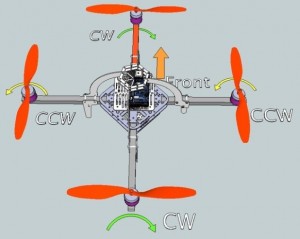 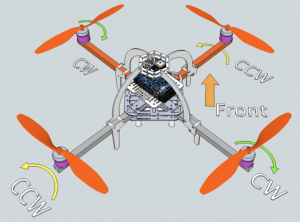 The choice of the direction of rotation of the propellers is made in the form of connecting cables between the motors and ESC. 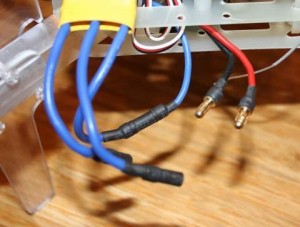 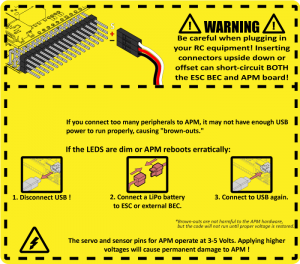 A RC of at least six channels is required. 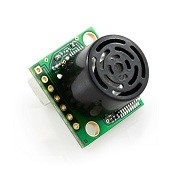 The use of sonar low altitude MaxSonar to maintain the level and prevent collisions is recommended. Below 3 meters high, the sonar is mainly used to maintain altitude; and above 3 meters, the barometric pressure sensor periodically calibrated by the GPS is used. In particular, to keep up the sonar MB1200 XL-MaxSonar EZ0 due to its proper width and high power beam is recommended.

For connection, place the probe in the structure of cuadcópter, looking down and carefully that there is nothing between the sensor and the ground. Land, voltage and pin 3 in the corresponding position of the IMU are connected according to the following image: 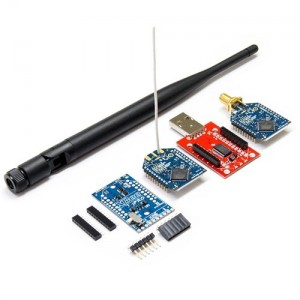 Add wireless telemetry to cuadcópter is not complicated and can extend the capabilities of multirotor considerably. We recommend using modules Xbee Wireless, which have a range of more than 1.5 kilometers.

We want to mount the module XBee in front of multirotor. For this welding start in the IMU four pins as shown below. 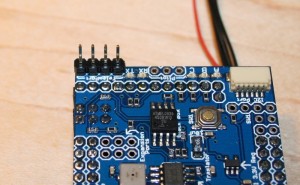 Now, turn the four pins with care 90 degrees to make them stand out from the plate by the side of it. 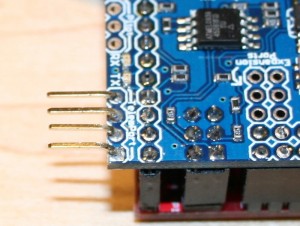 We connect the adapter XtremeBee to use the XBee 2.4GHz, to these pins. 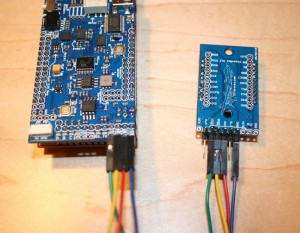 The adapter must be in « Master » (check the TX and RX pins).

When computer (landside) is required to connect the other adapter XtreamBee, simply by USB cable. The adapter must also be in the « Maestro» mode. 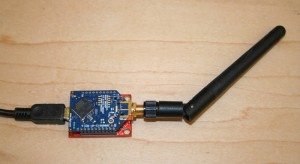 continued in next episode …